“He with nothing to lose has strength beyond imagining.”
–The Saffron Sutra

The Liberated Mind is the fifth Data Pack in the Mumbad Cycle for Android: Netrunner, and as the Mumbad Cycle continues to recast the game's cyberstruggles amid the heated politics and intrigues of the Indian Union, its sixty new cards (including a complete playset of nineteen different cards) explore the more transcendent qualities of life on the Network.

The idea of an expanded consciousness runs throughout nearly all of The Liberated Mind, as does the futuristic spirituality of a people whose philosophy is shaped by Hinduism, Jainism, and Buddhism as well as the ability to jack into the virtual world for months on end. You'll find the mysterious Temple of the Liberated Mind given shape, alongside several of its members and their philosophies. You'll also find ways for Runners to explore life, death, and rebirth in the virtual realm. And, finally, you'll find ways for Corps to counter the Runners' efforts to expand their consciousness or even to use the Runners to further their own agendas. 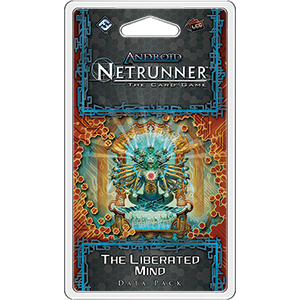