The game is played over a course of multiple rounds and each round consists of multiple turns. Each turn one player draws the top card of the deck, looks at it, and passes it to another player. The player who receives the card has a choice either to a) discard the card he / she is holding face up and take the new card without looking at it, or b) pass the card to another player without looking at it. After a player takes a turn, another player takes his / her turn.
The round continues until one of the round end conditions is met, at which point all players reveal their cards. At this time, if you are holding a cursed (red) card, then the card corrupts your mind and you lose sanity. If you are holding a sane (blue) artifact card but some other player is also holding the same artifact card (regardless of their color), the artifacts create unpleasant resonance and corrupts your mind, losing sanity. You successfully survive the ritual only if you are holding a unique sane (blue) card. 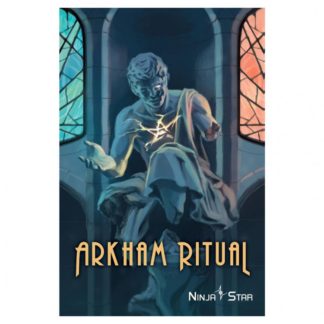