Designed by Carlo A. Rossi

Ready to place bets on a race among mythological flying creatures?

Zeus invited you, along with a bunch of other divine friends from all around the Multiverse, for a little get–together on Mount Olympus. After a legendary lunch and a few rounds of Ambrosia, you start making bets on which mythic creature is the fastest, and the only way to know it is to summon all those creatures for a good race, with the Olympic “All-father”, Zeus, as the ultimate judge!

In Divinity Derby every player assumes the role of a god, chosen among the six available (Anansi, Horus, Marduk, Odin, Quetzalcoatl, and Yù Huáng the Jade Emperor), betting on a race among mythological flying creatures on a special track.

Every game is divided into three races. At the start of each race, movement cards are distributed so each player can see and use the cards in two cardholders, which are shared with adjacent players. In every race, the players place their bets on the creatures, basing their choices on the movement cards they see.

During his turn, every player can choose two different movement cards from the two different hands of cards in the cardholders to make the creatures move on the race track.

There are a limited number of available bets to place on each creature, and every player has 11 different bets at his disposal, to split among the three races, using nine and leaving the two left unused at the end of the game. Every bet has a different difficulty level; the more difficult the bet is to complete, more victory points granted when completed.

After three races, the player with most victory points is the winning god! 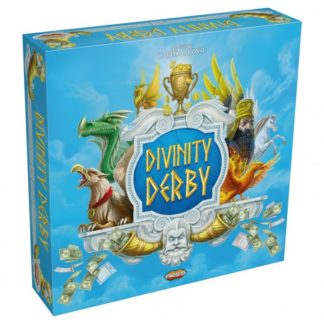