Set out for the Deep Sea!

Pilot your submarine to explore the depths in a quest for rare underwater animal species, forgotten treasures, and priceless pearls!

Upgrade sections of your submarine to venture deeper and score exploration points each turn for the animals you spot and the speed of your vessel. Unearth riches and discover coral reefs to score additional points at the end of the game.

The game is played in 3 rounds with 5 turns each. Each turn, the Exploration Leader deals 2 to 4 cards to each other player, depending on the number of periscopes on their submarine. Players pick one card to play, then give all the others back to the dealer, who gets to choose one among them. Fuel can be spent to play more cards on this turn.

The cards in front of you picture what you saw during your journey: fish and strange species, treasure chests, pearls, rare crystals, underwater bases, corals, or scary kraken eyes!
Whenever you play a base, you can upgrade your submarine. Add periscopes to the turret to draw more cards, enlarge the engine to carry more fuel tokens, enhance the propeller to increase speed, widen the observation deck to better spot underwater wildlife, or improve the airlock to send out divers collect more treasures!

At the end of each round, players score points for the different animals and pearls they played, and for the level of their propeller. But beware: whoever played the most Kraken eyes loses points! After 3 rounds, players score additional points for their longest uninterrupted coral reef and collected treasures. Whoever has the most points wins the game. 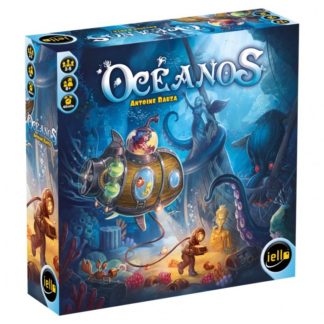