Pixel Tactics is a head-to-head card game that's small on size and big on strategy. Build your unit from 25 different hero classes. Rally around a leader that will affect everyone's capabilities, and go to war with your opponent in a fast-paced battle of strategies!

Some of the hero classes will be Mercenary (ignore wave restrictions on attacking), Failsafe (allows you to switch leaders mid-game), Dispatcher (recruit up to 14 heroes at once), Dreamseer (drawing cards is a free action for you) and Golem (force your opponents to flee in terror)

This is a standalone game with everything in the box but if you have the original Pixel Tactics or Pixel Tactics 2, you can combine the games and play constructed and draft variants! 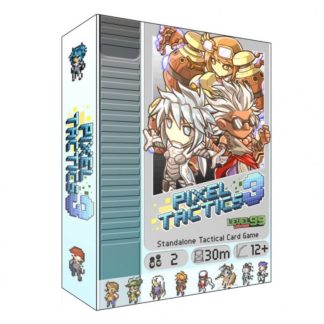