Defend the barony of Carthridge with the Baron Zachareth Hero Expansion for Runewars Miniatures Game! Ever since he first assumed power in suspicious circumstances, Baron Zachareth has been a devisive figure- some call him a hero, others a warmonger. But there are few who would deny that his skill with the blade and knowledge of runes and the arcane are unparralleled. With the ability to inspire his allies and intimidate, the Baron of Carthridge will defend Terrinoth no matter if the victories are bought with honor or with blood.

This is not a standalone product. It requires a copy of the Runewars Miniatures Game Core Set to play. 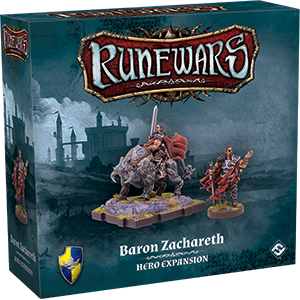