The year is 1667 and you are a pirate sailing the waters of the Caribbean. A Spanish Galleon floats nearby, and you've talked your crewmates into working together to steal all of its treasure. What you haven't told your fellow pirates is that you have no intentions on sharing the treasure once you have it.

Tortuga 1667 is a strategy/social-deduction game for 2-9 players. It comes in a faux book box and the rubber playing mat rolls up to disguise itself as a treasure map. In the game each player has a secret loyalty card, so deciding who you can trust is pivotal. Players will use their Vote cards to attack the Spanish for treasure, mutiny against selfish captains, and brawl against their fellow pirates. Players may also reveal Event cards such as a Letter of Marque or Pistol during the game to help their team and to hurt their enemies. But beware, if you reveal the Black Spot you'll be marooned to Tortuga. When the Spanish Armada card is revealed, the team with the most treasure wins. 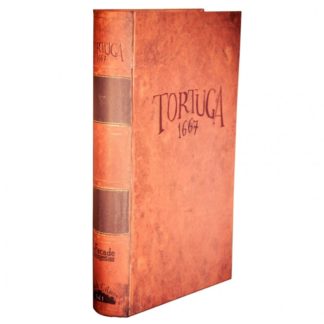